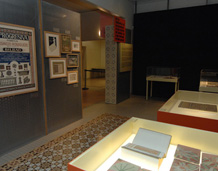 On Thursday 28 January, the opening of the new temporary exhibition Catifes Ciment took place at Can Tinturé Museum.

The traveling exhibition organized by the Diputació de Barcelona and Sitges Museus reaches Esplugues where it will be opened until the 3rd of April.

During the ceremony attended Roser Vilardell, director of the Museus d’Esplugues, Ignasi Domènech, curator of the exhibition, Josep González Cambray, coordinator of the Culture, Education and Sports of the Diputació of Barcelona and Albert Comellas, Councillor for Cultural Heritage of the City of Esplugues

As José González Cambray said that exhibition will stop at the Museum of Can Tinturé it was a necessity, due to the suitability of the space and the original hydraulic tiles that are still preserved in the halls.

Mr. Escofet, member of one of the most important factories of hydraulic tiles and Jordi Griset, collector and owner of most of the exhibits, attended at the ceremony.
The exhibition occupies part of the two floors of the Museum Can Tinturé and so the permanent exhibition has been changed. And Sunday guided tours will be replaced for a guided tour of the temporary exhibition during the Catifes de Ciment exhibition.

Catifes Ciment has collected a great success in his previous stops, and Museus d’Esplugues trust it continue, as demonstrated by the fact that during the first weekend of exhibition it have been visited by a hundred people. 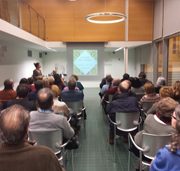 Mosaic and ceramic. The color in modernist architecture.

The MEL works for inclusion

The MEL works for inclusion