Angelina Alós (Valencia 1917 – Barcelona 1997) was ahead of her time both as an artist and as a woman in a period when the art of ceramics was mainly pursued by men. Her understanding of ceramics as art with a capital “A” and her unconventional output made her a forerunner and touchstone for later artists.

She was born in Valencia into a family with strong artistic roots: her father was the ceramist J.B. Alós, who at the beginning of the century had been the artistic director at the Pujol i Bausis factory popularly called “La Rajoleta”, and her mother, Esperanza Tormo, was a music teacher and composer.

Angelina grew up in a creative environment in which she studied ceramics and also music as a cellist, something she would later put to one side in order to become a professional ceramist.

In 1946 and after finishing her studies in painting, art and decoration, she became a teacher at the Escola del Treball where she worked practically uninterruptedly until her retirement in 1984.

Angelina Alós also had a long and successful career as a ceramist. In 1951 she set up her studio-workshop in Esplugues, a town to which she was always closely tied and where she would produce most of her ceramic output. Her work is characterised by innovative treatment of shapes and textures and by frequent and characteristic use of blue glazes in all their variations. 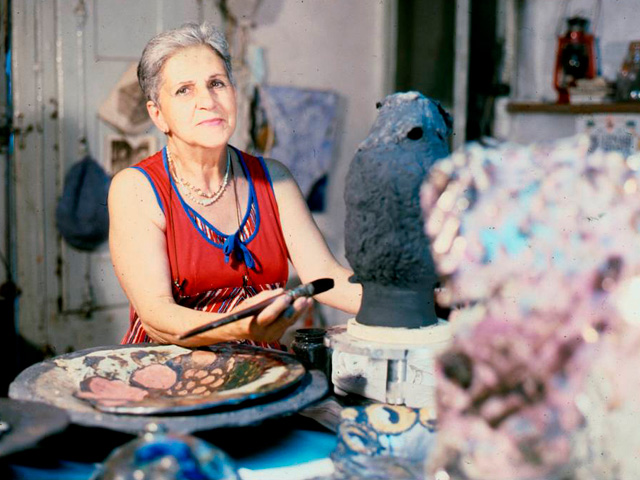 Angelina Alós in her workshop in Esplugues. Photo from Emili Sempere Ferràndiz archive