During the decade of the 80 s. XX, the town hall of Esplugues acquired the property of the ceramics factory Pujol i Bausis and populary known as “La Rajoleta”, then in the hands of the last owner. It was at the end of the decline of one of the companies devoted to ceramic industrial production that remained especially in Modernism, its highest period of splendor.

Architects like Gaudí, Gallissà, Puig i Cadafalch, Domènech and Montaner, Font i Gumà, Bassegoda… used to nourish their architectural works made of ceramic elements in Esplugues factory.

Its latest business record is placed in 1858, when two French partners Màrius Jourdan and Joan Terrada formed a partnership to build a “tile factory” in a place owned by Pau Pujol Franquesa. For documentary sources known as a place where “thin tiles and crockery tiles” were produced.

The company would go through different closures and changes of ownership until 1876, when Jaume Pujol i Bausis took over the factory. It was the beginning a period of stability with a quality of ceramic production that was gaining high visibility, especially during the period of his son Pablo Pujol Vilà, coinciding with the golden age of Modernism.

Architects like Gaudí, Gallissà, Puig i Cadafalch, Domènech i Montaner, Font i Gumà, Bassegoda… used to nourish their architectural works made of ceramic elements in Esplugues factory. Some of these architects along with ather artists (Adrià Gual, Alexandre de Riquer, Lluís Brú…) would have some ceramic projects for the factory. The company’s office in Barcelona, 9 Tallers street , and its factory in Esplugues existed yet during the first third of the XX century, with two high-profile art directors: Juan B. Alós i Peris and Francisco Quer i Selvas.

After the Civil War (1936-1939), the company became a public limited company Pujol i Bausis Ceramics PLC, led by Narciso Vallvé Bonany, a former worker pof the factory, and subsequently relived by his son Narciso Vallvé Asenjo.

New production lines to manufacture of electrical insulators and liners for ball mills will be initiated and, later, ceramic products will be marketed until its closure.

After a period of neglect and partial demolition, in 1994 the first interventions of the new enclosure bounded with the construction of a new building that currently houses the permanent exhibition “La Rajoleta” started. Later on, it performed in the entire archaeological surveys, the findings of completing the discoveries made in connection with the construction of the new building.

To celebrate the year of Gaudí, April 26th, 2002, the first public tours of the exhibition “La Rajoleta” began. The success of its overture will be recognized, in the following year, with the distinction of Bonaplata Awards in its mode of dissemination.

Despite the current provisional installations, the particularity of its ovens and other items of interest, enable the July 18th, 2006, the Governing Council of the Science and Technology Museum, passes his link as a collaborator museum. Then, on November 25th, 2007, with the name of Ceramics Museum “La Rajoleta” of Esplugues de Llobregat took offence their first collaboration agreement. 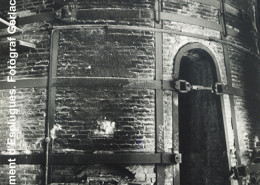 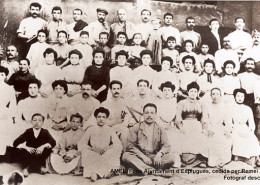 Presentation of the four representative periods of the company’s history: from its previous mid- of the XX century, through time of splendor Pujol i Bausis family until the reconversion into a limited company owned by Narciso Vallé and its definitive closure in 1984.

Explanation of the production process that was carried out in the factory: the preparation of the land and the pieces, and the baking of the different kilns.

Around the different types of production that have been made since more than 100 years of the factory, with particular emphasis on its relationship with Modernism, notably the site dedicated to the mosaic workshop of de Lluís Brú i Salelles.

This area was created in February 2010. It was basically focused on the mosaic technique through some museum-graphic items of reproduction and the original utensils tiles of the workshop. Inside, you can see a reproduced image taken in 1908.

The exhibition also displays some parts of the original mosaics and two exceptional pieces of Fonda Marina.