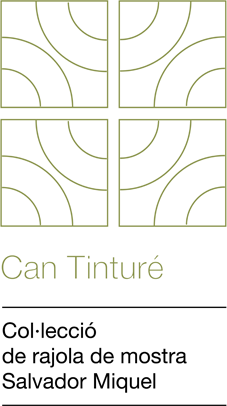 Can Tinturé is the first tile monographic museum in Spain and exposes pieces produced from the fourteenth to the nineteenth century.

The historic building Can Tinturé is set in the historic centre of Esplugues , in a house surrounded by gardens, built in 1898 by the architect Claudi Duran Ventosa, considered one of the pioneers of the reinforced concrete construction system. The house was built as a family residence commissioned by its first owner, John Tinturé Campreciós, who was alderman and mayor of Esplugues between 1910 and 1915.

In 1977 the building was purchased by the City of Esplugues and has had different use of cultural and social types over time. In 2000 – on the occasion of the acquisition of the collection of sample tiles by Salvador Miquel – its suitability as a museum site was decided.

In the process of rehabilitation original features of the historic building were highlighted with the adoption of innovative elements, which give an air of modernity to the architecture of the late nineteenth century.

On the day of Sant Jordi 2003 Can Tinturé Museum was opened the first monographic museum dedicated to Spanish tile samples. The opening of the new museum also meant public access to the gardens surrounding the house. In the garden the sculpture of artist Xavier Corberó was placed, composed of a set of five pieces of basalt.

In front of Can Tinturé stands The Masoveria, the only new building with auxiliary functions. The glass façade allows its integration into the grounds, while the other façade gives urban continuity with Esglèsia Street, sites and Urban environment Can Tinturé obtained, in 2004, a special mention for the action taken in the context of recognition of quality of municipal facilities and public spaces of the Barcelona Provincial Council. 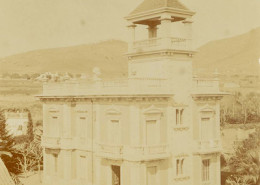 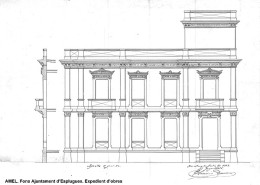 The permanent exhibition, inaugurated in 2003, is primarily up of a selection of pieces from the collection of sample tiles by Salvador Miquel.

Can Tinturé provides a chronological and aesthetic reading of the evolution of the tile show through the course of time, from medieval times to the threshold of industrialization, which is precisely when the origins of factory Pujol i Bausis begin “La Rajoleta”.

The visit begins with an explanation of the purpose of the museum, sample tiles and then the different areas of the exhibition are visited:

Introduction of the character through is tening to a radio interview with Salvador Miquel which is presented interactively.

The first sample tiles were found in paving from the XII century. Examples of fired clay tiles or decorated pieces with a white tin base and pattern which was mainly blue, painted with a cobalt oxide base. The blue tile became the symbol of the gothic bricks due to its large production.

The Renaissance and Baroque contributed to the use of ceramic colors and new sources of inspiration for the decorative patterns with classical roots. Trade routes facilitated contact with and a taste for Italian pottery, which had spread throughout Europe since the early s. XVI. The sample tiles were present on walls and floors of noble houses and churches.

The method of cataloging and studying the sample tile developed by Salvador Miquel includes a game that allows the visitor to cover a wall with different tiles from the collection.

During the eighteen and nineteenth centuries proliferated models that were copied from one workshop to another, which were personalized with the creation of small differences and highlighted its broad composition possibilities. There was an increased use of sample tiles which to households.

In the nineteenth century design simplification occurs. As a result of increased use of tiles by the masses and creates the need to produce faster and more economically, as well as a break with past decorative trends.

Blue, as in the medieval period, is again the most important colour in the XIX century. The blue line stands out on a white background and this second colours gives great luminosity to the small areas which have been decorated whith tiles: kitchens, family areas etc.

The names given to the sample tiles are included in the sample collection, which many ceramist showed to their clients when they were choosing a model.
The artesinal production added small differences to these models, which disappeared which the industrialisation of the process.

The examples of some pieces found in excavations carried out in the grounds of the Pujol and Bausis factory during the years 1999 and 2000 invite us to continue the visit in the Museum of Ceramics “La Rajoleta”. 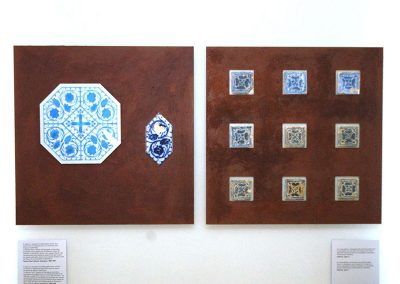 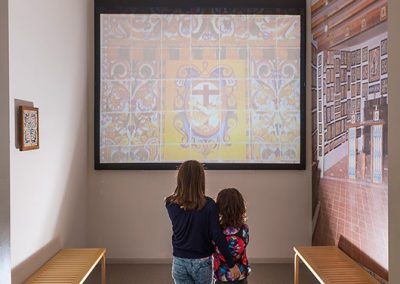 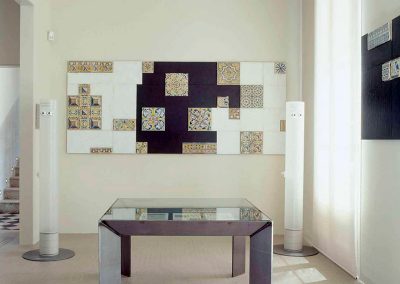 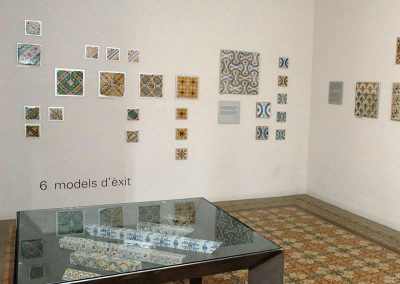 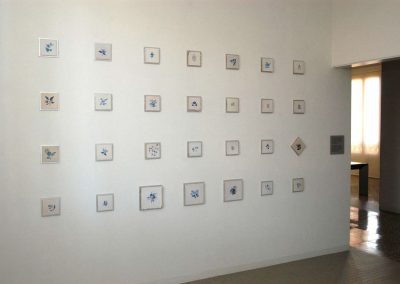 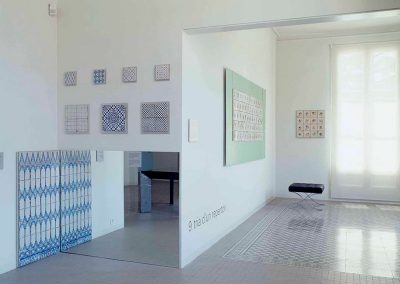 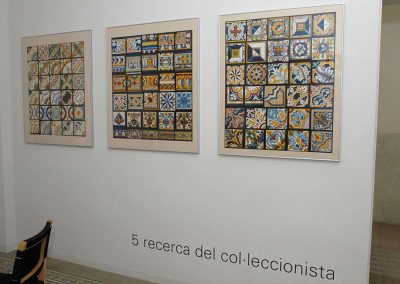 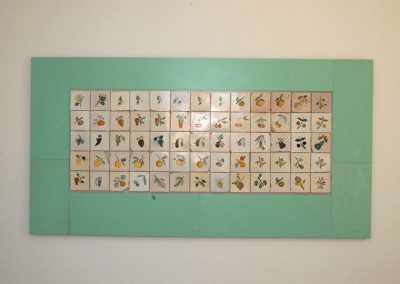 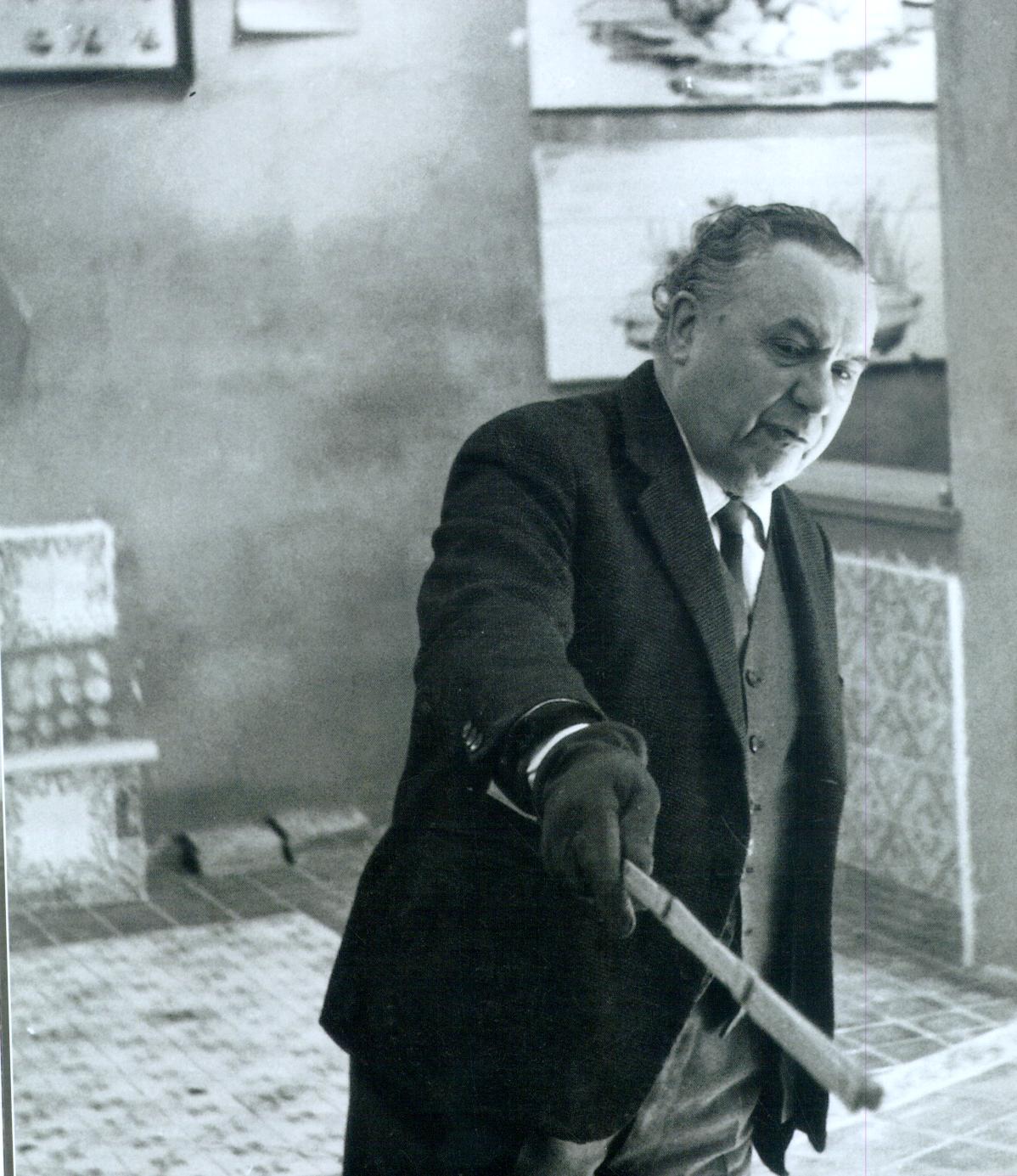 Salvador Miquel was born in the Barceloneta, district March 17, 1900. His youth was spent in a rich and vibrant cultural environment. His father, Antonio i Miguel Pardo, pioneered numerous cultural initiatives promoted in the neighborhood.

He began his collection of sample tiles between 1921 and 1922. Sample tiles are understood as those ceramic pieces, usually showing a geometric, repeating pattern that allows it to infinitely develop the model . This type of tiles were designed so that they could cover large areas.

Salvador Miguel recovered tiles from the rubble of the kitchens and dining rooms of the houses of La Barceloneta and the old town. Some pieces which were difficult to find were also acquired through antique shops.

Driven by his desire to study and publicize the importance of sample tiles, Salvador Miquel announced his collection in a permanent exhibition in Can Ros, Vallromanes, known as the Rajoloteca, during the years 1971 – 1999, a selection of which is on show today in Can Tinturé.

In 2003, the Esplugues Llobregat Councils opened the Can Tinturé Museum, which a present contains the Salvador Miquel Sample tile Collection.